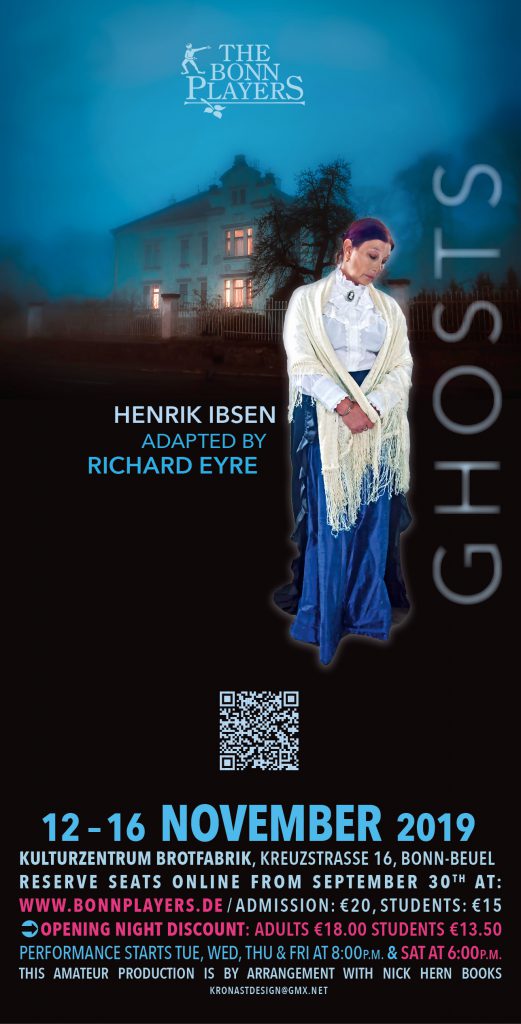 Dear BUSC-followers,
want to see some amazing English language theater in November?
Check out our friends, The Bonn Players!
This time, they are putting on a thrilling family drama by Henrik Ibsen – make sure that you don’t miss out on this, there’s even a special ticket discount on opening night and a Q&A sessions to look forward to on the 12th and 13th of November!
We can’t wait to see it – and hopefully see you there as well!

“Ghosts” focuses on Helene, who has spent her life suspended in an emotional void after the death of her cruel but outwardly charming husband. She is determined to escape the ghosts of her past by telling her son, Oswald, the truth about his father. But on his return from his life as a painter in France, Oswald reveals how he has already inherited the legacy of Captain Alving’s dissolute life. The play premiered in 1882 and it‘s scathing commentary on 19th century morality labelled it shockingly indecent and controversial. Now the play is back and it is just as telling as ever. The play „Ghosts” is given a chilling new life in this production.